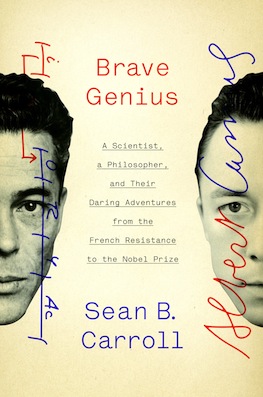 Sean B. Carroll is the author of Remarkable Creatures, a finalist for the National Book Award; The Making of the Fittest, winner of the Phi Beta Kappa Science Book Award; and Endless Forms Most Beautiful. Carroll also writes a monthly feature, “Remarkable Creatures,” for the New York Times’ Science Times. An internationally known scientist and leading educator, Dr. Carroll currently heads the Department of Science Education of the Howard Hughes Medical Institute and is Professor of Molecular Biology and Genetics at the University of Wisconsin. His new book is Brave Genius: A Scientist, a Philosopher, and Their Daring Adventures from the French Resistance to the Nobel Prize.

“I have known only one true genius: Jacques Monod,” claimed Albert Camus. Known to biologists for his Nobel Prize–winning, pioneering genetic research, Monod is credited with some of the most creative and influential ideas in modern biology. But while a few texts mention in passing that Monod was “in the Resistance” and “friends with Albert Camus,” none have examined the impact of the chaos of war on his work, nor the camaraderie between these two extraordinary men—until now. In Brave Genius: A Scientist, a Philosopher, and Their Daring Adventures from the French Resistance to the Nobel Prize, leading evolutionary biologist and National Book Award finalist Sean B. Carroll draws on a wealth of previously unknown and unpublished material to tell the dramatic and inspiring story of the lives of two men who triumphed over overwhelming adversity to pursue the meaning of existence on every level from the molecular to the philosophical.

Sean was kind enough to answer a few questions about his new book.

How did you discover the story of Camus and Monod?

A couple of previous authors mentioned briefly that they were friends, but offered nothing more. It seemed obvious to me from Monod’s writing that Camus had influenced him a great deal, so I wanted to know how well they knew each other and for how long. The first sign that I might make some headway was a letter from Camus to Monod that a family member shared with me. The letter was very warm, and encouraged me to keep looking. That led to another letter, and then to some anecdotes from people who had been together with Camus and Monod. I was also able to unearth some interviews in which Monod discussed Camus. My favorite jackpot came when I asked Monod’s son Olivier whether his father’s Camus books were inscribed. He took a look. They were all personalized with revealing phrases, and out of one dropped another letter… in which Camus was asking for medical advice concerning his mistress’s father!

Eventually, I was able to determine that their friendship spanned more than a decade. More importantly, I was able to place their relationship in the context of other pivotal events in each man’s life. I was even able to determine from some unpublished notes that Camus lifted some of his arguments in his anti-Soviet essay The Rebel directly from Monod. That was very satisfying detective work.

Did the two men view politics in the same way?

Definitely. After the experience of the Occupation of France (during which they both had significant roles in the Resistance), they each felt an obligation to speak out against injustice and oppression. For example, they both publicly condemned the Soviet regime and its French supporters. They both strongly supported the Hungarian revolution – Camus in print, Monod by smuggling scientists out of the country. They also both opposed the death penalty, and that movement eventually succeeded in getting the death penalty abolished in the EU.

What was Camus’s position on the French presence in Algeria?

Camus was neither on the side of the Algerian militants seeking independence from France, nor on the side of the French government that fought the militants, and often imposed very harsh punishments, including the death penalty. Camus thought that there should be some middle ground of greater autonomy for Algeria, but also that the country, so long a part of France and settled by many French, maintain a connection to France.  Criticized by both sides, Camus decided to become silent on the matter publicly, and to work behind the scenes.

What did Monod and Camus have in common intellectually?

They shared the drive to push logic as far as one could. Camus did so in The Myth of Sisyphus, Monod in his scientific life and in his book Chance and Necessity.  Both men were convinced that this life is the only one we get. Each was keen to pursue the implications of that conclusion.

Monod was influenced a great deal by Camus. The epigraph of Chance and Necessity was the closing paragraphs of The Myth of Sisyphus. Monod thought that Camus had provided the key to living with the knowledge of our finite lifetimes: “The struggle itself toward the heights is enough to fill a man’s heart.”

How did Camus and Monod view the relationship, or conflict, between religion and science?

Camus looked at religion from a philosophical perspective rather than a scientific one. He considered any appeal to religious faith “philosophical suicide,” an abandonment of reason. He thought that the principal issue was how to live this life fully, the only one we are sure to have.  Camus’s recipe for living life to the fullest was to do nothing in the hope of an afterlife, but to rely on courage and reason.

In his book Chance and Necessity, Monod expounded at length on the conflict between science and religion. He saw religion as a collection of primitive myths that had been blown to shreds by science. After his experiences in the war and with Soviet ideology, Monod declared that his life’s goal was “a crusade against antiscientific, religious metaphysics, whether it be from Church or State.”

At every turn, Monod emphasized the role of chance in human existence, an idea that is antithetical to essentially every religious doctrine that places humans as some inevitable intention of a Creator. “Man was the product of an incalculable number of fortuitous events,” Monod argued, “the result of a huge Monte-Carlo game, where our number eventually did come out, when it might not well have appeared.”

Bolstered by the new evidence from molecular biology of a universal genetic code and the random nature of the mutation process, Monod delivered the bad news for every religion that asserts some form of Design:

Chance alone is at the source of every innovation, of all creation in the biosphere…this central concept of modern biology is no longer one among other possible hypotheses…it is the only one that squares with observed and tested fact. And nothing warrants the… hope that on this score our position is likely ever to be revised. There is no scientific concept, in any of the sciences, more destructive of anthropocentrism than this one.