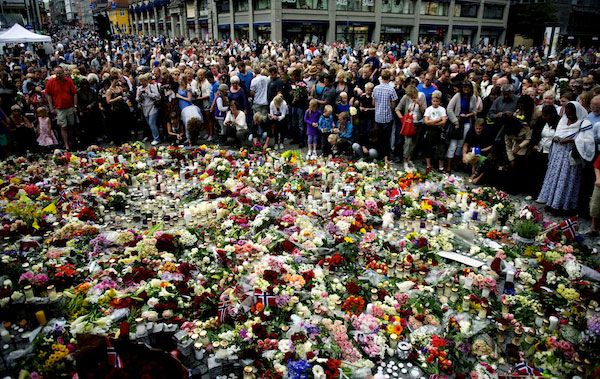 At certain points near the extremity of human evil it becomes difficult, and perhaps pointless, to make ethical distinctions. However, I cannot shake the feeling that detonating a large bomb in the center of a peaceful city with the intent of killing vast numbers of innocent people was the lesser of Anders Behring Breivik’s transgressions last week. It seems to me that it required greater malice, and even less humanity, to have intended this atrocity to be a mere diversion, so that he could then commit nearly one hundred separate murders on the tiny Island of Utoya later in the day.

And just when one thought the human mind could grow no more depraved, one learns details like the following:

After killing several people on one part of the island, he went to the other, and, dressed in his police uniform, calmly convinced the children huddled there that he meant to save them. When they emerged into the open, he fired again and again. (“For Young Campers, Island Turned Into Fatal Trap.” The New York Times, July 23, 2011)

Other unsettling facts will surely surface in the coming weeks. Some might even be vaguely exculpatory. Is Breivik mentally ill? Judging from his behavior, it is difficult to imagine a definition of “sanity” that could contain him.

It has been widely reported that Breivik is a “Christian fundamentalist.” Having read parts of his 1500-page manifesto, 2083: A European Declaration of Independence, I must say that I have my doubts. These do not appear to be the ruminations of an especially committed Christian:

I’m not going to pretend I’m a very religious person as that would be a lie. I’ve always been very pragmatic and influenced by my secular surroundings and environment. In the past, I remember I used to think:

“Religion is a crutch for weak people. What is the point in believing in a higher power if you have confidence in yourself!? Pathetic.”

Perhaps this is true for many cases. Religion is a crutch for many weak people and many embrace religion for self serving reasons as a source for drawing mental strength (to feed their weak emotional state f example during illness, death, poverty etc.). Since I am not a hypocrite, I’ll say directly that this is my agenda as well. However, I have not yet felt the need to ask God for strength, yet… But I’m pretty sure I will pray to God as I’m rushing through my city, guns blazing, with 100 armed system protectors pursuing me with the intention to stop and/or kill. I know there is a 80%+ chance I am going to die during the operation as I have no intention to surrender to them until I have completed all three primary objectives AND the bonus mission. When I initiate (providing I haven’t been apprehended before then), there is a 70% chance that I will complete the first objective, 40% for the second, 20% for the third and less than 5% chance that I will be able to complete the bonus mission. It is likely that I will pray to God for strength at one point during that operation, as I think most people in that situation would….If praying will act as an additional mental boost/soothing it is the pragmatical thing to do. I guess I will find out… If there is a God I will be allowed to enter heaven as all other martyrs for the Church in the past. (p. 1344)

As I have only read parts of this document, I cannot say whether signs of a deeper religious motive appear elsewhere in it. Nevertheless, the above passages would seem to undermine any claim that Breivik is a Christian fundamentalist in the usual sense. What cannot be doubted, however, is that Breivik’s explicit goal was to punish European liberals for their timidity in the face of Islam.

I have written a fair amount about the threat that Islam poses to open societies, but I am happy to say that Breivik appears never to have heard of me. He has, however, digested the opinions of many writers who share my general concerns—Theodore Dalrymple, Robert D. Kaplan, Lee Harris, Ibn Warraq, Bernard Lewis, Andrew Bostom, Robert Spencer, Walid Shoebat, Daniel Pipes, Bat Ye’or, Mark Steyn, Samuel Huntington, et al. He even singles out my friend and colleague Ayaan Hirsi Ali for special praise, repeatedly quoting a blogger who thinks she deserves a Nobel Peace Prize. With a friend like Breivik, one will never want for enemies.

One can only hope that the horror and outrage provoked by Breivik’s behavior will temper the growing enthusiasm for right-wing, racist nationalism in Europe. However, one now fears the swing of another pendulum: We are bound to hear a lot of deluded talk about the dangers of “Islamophobia” and about the need to address the threat of “terrorism” in purely generic terms.

The emergence of “Christian” terrorism in Europe does absolutely nothing to diminish or simplify the problem of Islam—its repression of women, its hostility toward free speech, and its all-too-facile and frequent resort to threats and violence. Islam remains the most retrograde and ill-behaved religion on earth. And the final irony of Breivik’s despicable life is that he has made that truth even more difficult to speak about.