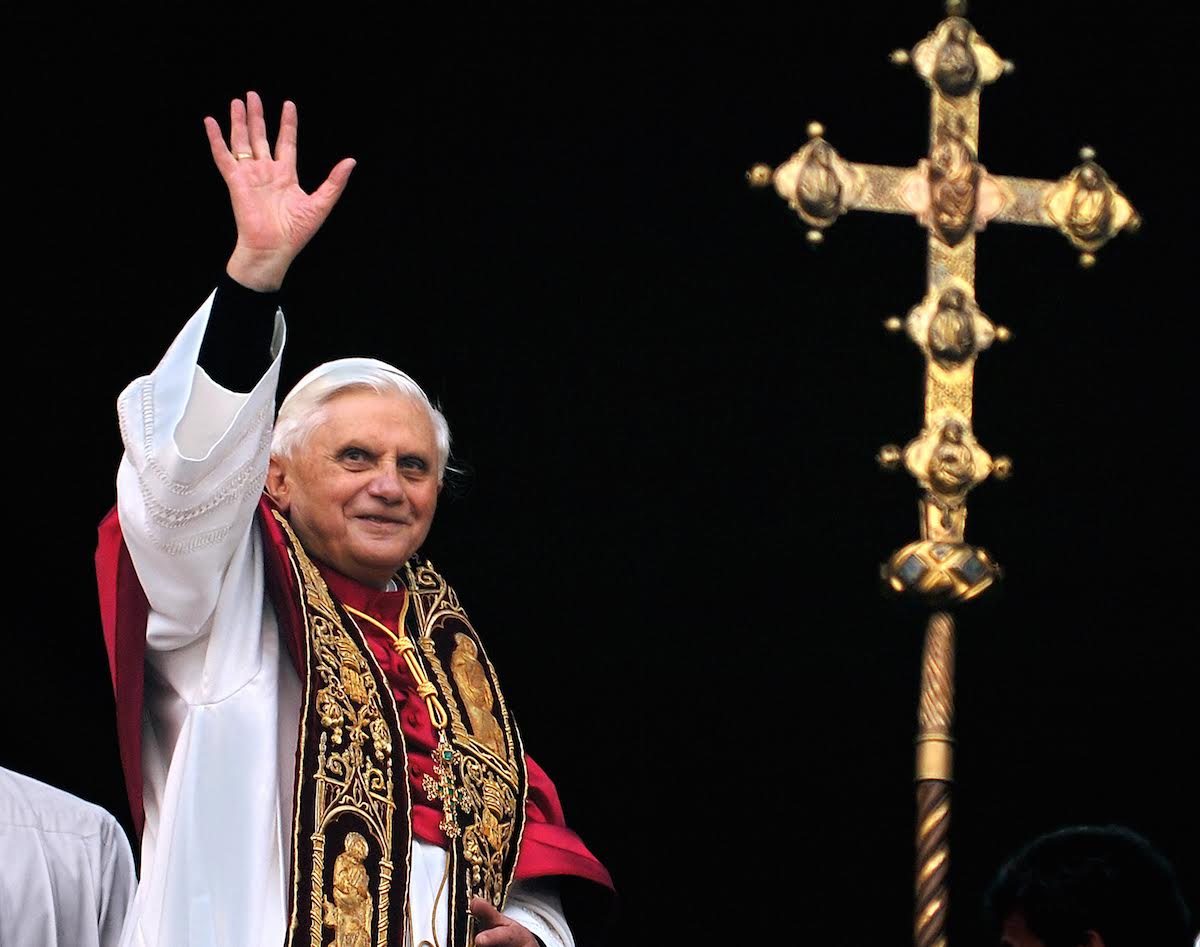 Pope Benedict XVI waves to pilgrims as he climbs the stairs of a stage before celebrating Mass at a Munich fairground Sept. 10. The German-born pontiff visited his homeland Sept. 9-14.

The world is still talking about the pope’s recent speech—a speech so boring, convoluted and oblique to the real concerns of humanity that it could well have been intended as a weapon of war. It might start a war, in fact, given that it contained a stupendously derogatory appraisal of Islam. For some reason, the Holy Father found it necessary to quote the Emperor Manual II Paleologos, who said: “Show me just what Muhammad brought that was new and there you will find things only evil and inhuman….” Now the Muslim world is buzzing with pious rage. It’s a pity that Pope Benedict doesn’t also draw cartoons. Joining a craven chorus of terrified supplicants, The New York Times has urged him to muster a “deep and persuasive’’ apology. He now appears to be mincing his way toward the performance of just such a feat.

While the pope succeeded in enraging millions of Muslims, the main purpose of his speech was to chastise scientists and secularists for being, well, too reasonable. It seems that nonbelievers still (perversely) demand too much empirical evidence and logical support for their worldview Believing that he was cutting to the quick of the human dilemma, the pope reminded an expectant world that science cannot pull itself up by its own bootstraps: It cannot, for instance, explain why the universe is comprehensible at all. It turns out that this is a job for (wait for it) Christianity. Why is the world susceptible to rational understanding? Because God made it that way. While the pope is not much of a conjurer, many intelligent and well-intentioned people imagined they actually glimpsed a rabbit in this old hat. Andrew Sullivan, for instance, praised the pope’s deep and complicated address for its clarity and openness. Here is the heart of the pope’s argument, excerpted from his concluding remarks. I have added my own commentary throughout.

“The intention here is not one of retrenchment or negative criticism, but of broadening our concept of reason and its application. While we rejoice in the new possibilities open to humanity, we also see the dangers arising from these possibilities and we must ask ourselves how we can overcome them. We will succeed in doing so only if reason and faith come together in a new way, if we overcome the self-imposed limitation of reason to the empirically verifiable, and if we once more disclose its vast horizon….”

The pope suggests that reason should be broadened to include the empirically unverifiable. And is there any question these new “vast horizons” will include the plump dogmas of the Catholic Church? Here, the pope gets the spirit of science exactly wrong. Science does not limit itself merely to what is currently verifiable. But it is interested in questions that are potentially verifiable (or, rather, falsifiable). And it does mean to exclude the gratuitously stupid. With these distinctions in mind, consider one of the core dogmas of Catholicism, from the Profession of Faith of the Roman Catholic Church:

I likewise profess that in the Mass a true, proper, and propitiatory sacrifice is offered to God on behalf of the living and the dead, and that the Body and the Blood, together with the soul and the divinity, of our Lord Jesus Christ is truly, really, and substantially present in the most holy sacrament of the Eucharist, and there is a change of the whole substance of the bread into the Body, and of the whole substance of the wine into Blood; and this change the Catholic Mass calls transubstantiation. I also profess that the whole and entire Christ and a true sacrament is received under each separate species.

While one can always find a Catholic who is reluctant to admit that cannibalism lies at the heart of the faith, there is no question whatsoever that the Church intends the above passage to be read literally. The real presence of the body and blood of Christ at the Mass is to be understood as a material fact. As such, this is a claim about the physical world. It is, as it happens, a perfectly ludicrous claim about the physical world. (Unlike most religious claims, however, the doctrine of Transubstantiation is actually falsifiable. It just happens to be false.) Despite the pope’s solemn ruminations on the subject, reason is not so elastic as to encompass the favorite dogmas of Catholicism. Needless to say, the virgin birth of Jesus, the physical resurrection of the dead, the entrance of an immortal soul into the zygote at the moment of conception, and almost every other article of the Catholic faith will land in the same, ill-dignified bin. These are beliefs that Catholics hold without sufficient reason. They are, therefore, unreasonable. There is no broadening of the purview of 21st-century rationality that can, or should, embrace them.

“Only thus do we become capable of that genuine dialogue of cultures and religions so urgently needed today….”

It is ironic that a man who has just disparaged Islam as evil and inhuman before 250,000 onlookers and the world press is now talking about a genuine dialogue of cultures. How much genuine dialogue can he hope for? The Koran says that anybody who believes that Jesus was divine as all real Catholics must will spend eternity in hell (Koran 5:71-75; 19:30-38). This appears to be a deal-breaker. The pope knows this. The Muslim world knows that he knows it. And he knows that the Muslim world knows that he knows it. This is not a good basis for interfaith dialogue.

“In the Western world it is widely held that only positivistic reason and the forms of philosophy based on it are universally valid. Yet the world’s profoundly religious cultures see this exclusion of the divine from the universality of reason as an attack on their most profound convictions. A reason which is deaf to the divine and which relegates religion into the realm of subcultures is incapable of entering into the dialogue of cultures….”

Astrologers don’t like their most profound convictions attacked either. Neither do people who believe that space aliens have traversed the galaxy only to molest ranchers and their cattle. Happily, these groups do not take to the streets and start killing people when their irrational beliefs are challenged. I suspect that the pope would be the first to admit that there are millions of people on this Earth who harbor most profound convictions that are neither profound nor compatible with real dialogue. Indeed, one doesn’t even need to read between the lines of his speech to glean that he would place the entire Muslim world beyond the “universality of reason”. He is surely right to be alarmed by Islam particularly by its doctrines of martyrdom and jihad. He is right to find the treatment of Muslim women throughout the world abhorrent (if, indeed, he does find it abhorrent). He is right to be concerned that any Muslim who converts to Christianity (or to atheism) has put his life in jeopardy, as conversion away from the faith is punishable by death. These profundities are worthy objects of our derision. No apologies necessary, Your Holiness.

We might, however, note in passing that one of the pope’s most profound convictions is that contraception is a sin. His agents continue to preach this diabolical dogma in the developing world, and even in sub-Saharan Africa, where over 3 million people die from AIDS each year. This is unconscionable and irredeemably stupid. It is also a point on which the Church has not shown much of an intelligent capacity for dialogue. Despite their inclination to breed themselves into a state of world domination, Muslims tend to be far more reasonable on the subject of family planning. They do not consider the use of temporary forms of birth control to be a sin.

“Modern scientific reason quite simply has to accept the rational structure of matter and the correspondence between our spirit and the prevailing rational structures of nature as a given, on which its methodology has to be based. Yet the question why this has to be so is a real question, and one which has to be remanded by the natural sciences to other modes and planes of thought—to philosophy and theology….”

This may have been where Sullivan found the Holy Father to be particularly deep and complicated and profound. Granted, questions of epistemology can make one sweat, and there are many interesting and even controversial things to be said about the foundations of our knowledge. The pope has not said anything interesting or controversial here, however. He has merely insinuated that placing the God of Abraham at the back of every natural process will somehow reduce the quotient of mystery in the cosmos. It won’t. Nearly a billion Hindus place three gods Brahma (the Creator), Vishnu (the Preserver) and Shiva (the Destroyer) in the space provided. Just how intellectually illuminating should we find that?

“The West has long been endangered by this aversion to the questions which underlie its rationality, and can only suffer great harm thereby. The courage to engage the whole breadth of reason, and not the denial of its grandeur—this is the program with which a theology grounded in Biblical faith enters into the debates of our time. “Not to act reasonably, not to act with logos, is contrary to the nature of God”, said Manuel II, according to his Christian understanding of God, in response to his Persian interlocutor….”

Please read that first sentence again. I hope it doesn’t seem peevish to point out that the West faces several dangers even greater than those posed by an incomplete epistemology. The West is endangered, primarily, by the religious fragmentation of the human community, by religious impediments to clear thinking, and by the religious willingness of millions to sacrifice the real possibility of happiness in this world for a fantasy of a world to come. We are living in a world where untold millions of grown men and women can rationalize the violent sacrifice of their own children by recourse to fairy tales. We are living in world where millions of Muslims believe that there is nothing better than to be killed in defense of Islam. We are living in a world in which millions of American Christians hope to soon be raptured into the sky by Jesus so that they can safely enjoy the holy genocide that will inaugurate the end of human history. We are living in a world in which a silly old priest, by merely giving voice to his religious inanities, could conceivably start a war with 1.4 billion Muslims who take their own inanities in deadly earnest. These are real dangers. And they are not dangers for which more “Biblical faith” is a remedy.