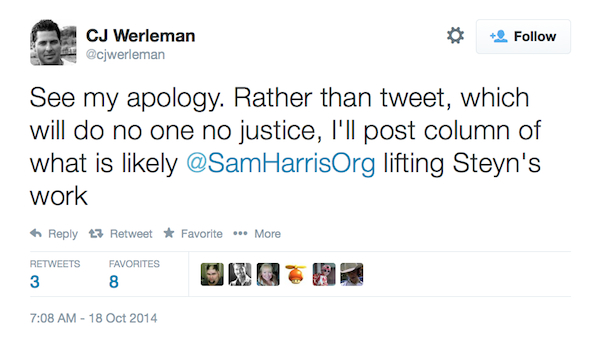 1. C.J. Werleman, a writer for Salon and Alternet, has made a habit of publicly misrepresenting my views.

2. When I first noticed this behavior, I contacted him, initiating a brief and unpleasant email exchange.

3. After that exchange, Werleman went on to misrepresent my views with even greater fervor.

4. Werleman was subsequently discovered to be a serial plagiarist.

5. His response to this public humiliation was to accuse me of being a plagiarist too. Specifically, I am alleged to have plagiarized the work of Mark Steyn.

6. Evidence for this charge has been presented on a blog that seems to have been created yesterday for this purpose by “Stephanie Cranson” (who also joined Twitter only yesterday). Note that this is two days after Werleman claimed to have knowledge of my stealing Steyn’s work. I shall let readers make of this timeline what they will.

7. This newborn blogger has noticed that a passage in Letter to a Christian Nation (2006) seems suspiciously similar to one in Steyn’s book America Alone (2006)—which, we are told, was published six months earlier.

8. However, the suspicious passage also appears in my first book, The End of Faith, published two years earlier still (2004). It can be found on page 26 of both the hardcover and paperback editions.

9. Another passage I am alleged to have plagiarized from Steyn also appears in The End of Faith (p. 133). For that, I cited the following source in an endnote: “From the United Nations’ Arab Human Development Report 2002, cited in Lewis, Crisis of Islam, 115–17.”

10. “Stephanie Cranson” makes other allegations on “her” blog that are equally unfounded.  For instance, she claims that I plagiarized from my friend Richard Dawkins, on the basis of similarity between the following passages:

Dawkins: “Although Martin Luther King was a Christian, he derived his philosophy of non-violent civil disobedience directly from Gandhi, who was not.”

Harris: “While King undoubtedly considered himself a devout Christian, he acquired his commitment to non-violence primarily from the writings of Mohandas K. Gandhi.”

The Dawkins quote appears on page 307 of The God Delusion. Mine can be found on page 12 of Letter to a Christian Nation.  As readers can learn on Amazon, these books were published a day apart in September of 2006. And, needless to say, this observation about King’s debt to Gandhi has been made many, many times before.

11. This will be the last thing I ever write about C.J. Werleman.