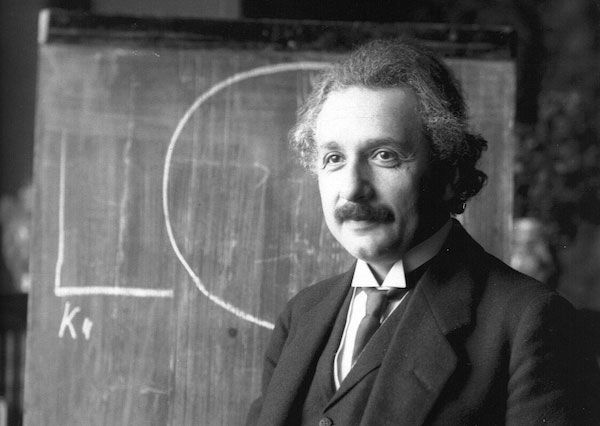 In my last post, I suggested that Einstein shared my skepticism about free will. Nothing in my argument turned on this, of course: Several great physicists have believed in free will, and Einstein got many things wrong, both inside and outside of physics. One doesn’t argue these points on the basis of authority in any case—and this is what distinguishes science and philosophy from religion. Respecting one’s elders, however brilliant, is no substitute for making sense.

Nevertheless, it is generally interesting to know what great scientists believe. And a helpful reader has called my attention to the fact that Einstein viewed the connection between scientific and moral truth in terms similar to those I argue for in The Moral Landscape (thanks Matt!).

In the following essay, Einstein endorses a strong conception of moral truth, founded on axioms, and focused on the well-being of humanity. While he does not discuss progress in neuroscience and psychology—which, I maintain, makes the separation between ethics and science ultimately unsustainable—he seems to consider ethical truth to be on all fours with the truths of mathematics and the rest of science.

I have added a few footnotes to clarify points of interest.

Science searches for relations which are thought to exist independently of the searching individual. This includes the case where man himself is the subject. [1]

Here, Einstein neatly distinguishes between epistemological and ontological “objectivity.” Science is fully committed to the former; it is in no sense limited to the latter. There is no question that we can study human subjectivity—including the difference between misery and well-being—objectively.
Or the subject of scientific statements may be concepts created by ourselves, as in mathematics. Such concepts are not necessarily supposed to correspond to any objects in the outside world. However, all scientific statements and laws have one characteristic in common: they are “true or false” (adequate or inadequate). Roughly speaking, our reaction to them is “yes or “no.”

The scientific way of thinking has a further characteristic. The concepts which it uses to build up its coherent systems are not expressing emotions. For the scientist, there is only “being,” but no wishing, no valuing, no good, no evil; no goal. As long as we remain within the realm of science proper, we can never meet with a sentence of the type: “Thou shalt not lie.” [2]

Einstein may seem to contradict the thesis I advance in The Moral Landscape here, but the rest of the text reveals that our views about moral truth are quite close. To my ear, the preceding sentences simply emphasize the epistemic objectivity of science and suggest that the notion of “moral duty” may be problematical (which, I believe, it is).
There is something like a Puritan’s restraint in the scientist who seeks truth: he keeps away from everything voluntaristic or emotional. Incidentally, this trait is the result of a slow development, peculiar to modern Western thought.

From this it might seem as if logical thinking were irrelevant for ethics. Scientific statements of facts and relations, indeed, cannot produce ethical directives. [3]

Shades of Hume, no doubt, but keep reading…
However, ethical directives can be made rational and coherent by logical thinking and empirical knowledge. If we can agree on some fundamental ethical propositions, then other theoretical propositions can be derived from them, provided that the original premises are stated with sufficient precision. Such ethical premises play a similar role in ethics, to that played by axioms in mathematics.

This is why we do not feel at all that it is meaningless to ask such questions as: “Why should we not lie?” We feel that such questions are meaningful because in all discussions of this kind some ethical premises are tacitly taken for granted.  We then feel satisfied when we succeed in tracing back the ethical directive in question to these basic premises. In the case of lying this might perhaps be done in some way such as this: Lying destroys confidence in the statements of other people. Without such confidence, social cooperation is made impossible or at least difficult. Such cooperation, however, is essential to make human life possible and tolerable. This means that the rule “Thou shalt not lie” has been traced back to the demands: “Human life shall be preserved” and “Pain and sorrow shall be lessened as much as possible.”

But what is the origin of such ethical axioms? Are they arbitrary? Are they based on mere authority? Do they stem from experiences of men, and are they conditioned indirectly by such experiences?

For pure logic all axioms are arbitrary, including the axioms of ethics. But they are by no means arbitrary from a psychological and genetic point of view. They are derived from our inborn tendencies to avoid pain and annihilation, and from the accumulated emotional reaction of individuals to the behavior of their neighbors.

It is the privilege of man’s moral genius, impersonated by inspired individuals, to advance ethical axioms which are so comprehensive and so well founded that men will accept them as grounded in the vast mass of their individual emotional experiences. Ethical axioms are found and tested not very differently from the axioms of science. Truth is what stands the test of experience.