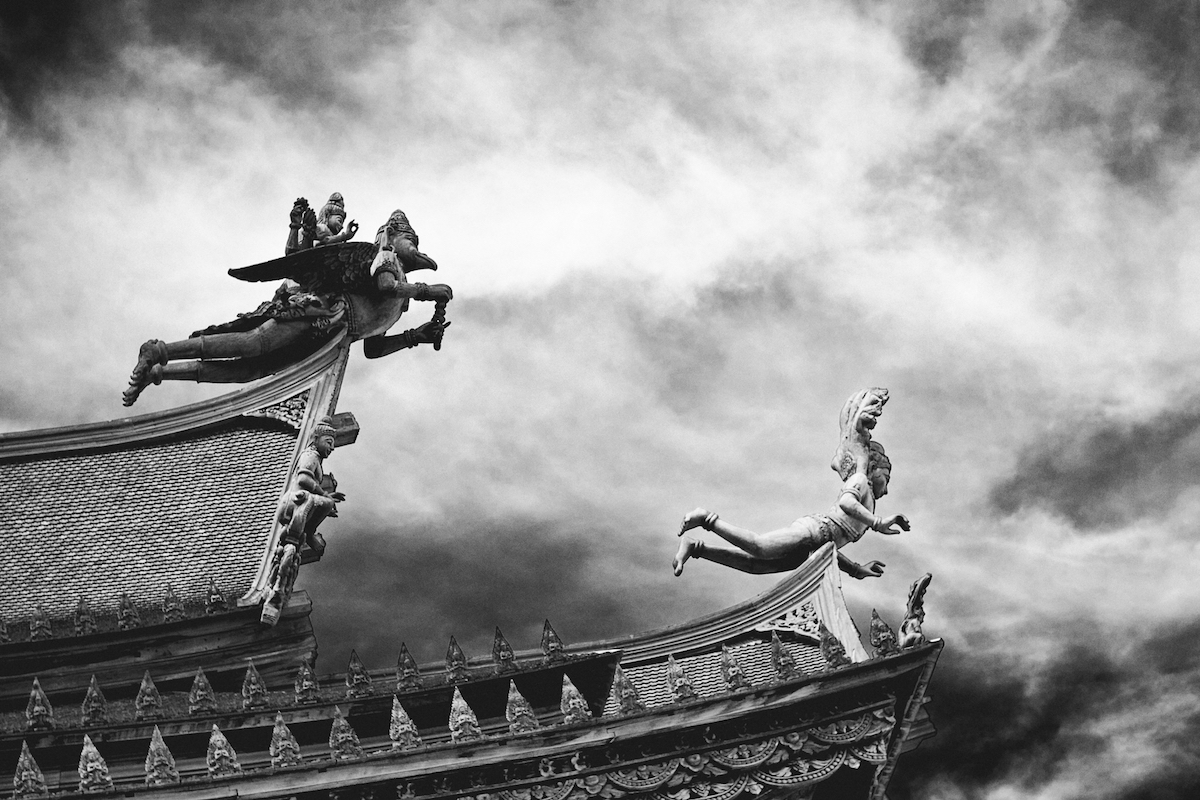 I recently interviewed the psychologist Jordan B. Peterson on the Waking Up podcast. As I said at the beginning of our conversation, I’d received more listener requests for him than for Neil deGrasse Tyson, Richard Dawkins, Steven Pinker, Edward Snowden—or, indeed, any other person on earth.

The resulting exchange, however, was not what our mutual fans were hoping for. Rather than discuss religion and atheism, or the relationship between science and ethics, we spent two hours debating what it means to say that a proposition is (or seems to be) “true.” This is a not trivial problem in philosophy. But the place at which Peterson and I got stuck was a strange one. He seemed to be claiming that any belief system compatible with our survival must be true, and any that gets us killed must be false. As I tried to show, this view makes no sense, and I couldn’t quite convince myself that Peterson actually held it. The response on social media suggests that most listeners found our exchange as perplexing and frustrating as I did.

The main criticism directed at me has been that once we hit this impasse, I wasn’t a gracious enough host to let the dialogue proceed to other topics. I understand this complaint (and even anticipated it during the dialogue itself). But I feared that if we moved on to discuss the validity of religious faith, the power of myth, the reality of Jungian archetypes, or any of the more ethereal topics for which Peterson has become a celebrated exponent, without first agreeing on how sane and reasonable people can differentiate fact from fantasy, we were doomed to talk past each other with every sentence.

The response on social media suggests that most listeners found our exchange as perplexing and frustrating as I did.

Peterson and I ended the podcast on a civil note, and I promised to have him back if our listeners wanted us to attempt to address other topics. He has since tried to clarify his position in a series of emails, one of which he has read publicly.

Here is part of that text (as emailed to me), in which he speaks about the necessity of finding a basis for ethics (i.e., answering the question “How should we act in the world?”) within a Darwinian framework:

“Here’s an answer: individually, such that the family thrives; at the family level, so that society thrives; at the societal level, so that the ecosystem thrives—today, tomorrow, next week, next year, and across time. That’s the ultimate Piagetian equilibrated state (and Piaget, by the way—although few know this—was trying to solve the problem of the relationship between science and ethics. That’s what drove him his entire life).

The individual who acts in this manner is the mythological hero, who confronts the unknown with attention and intent to communicate, who obtains the gold from the eternal dragon of chaos (an evolved representation of the predatory/promising domain beyond the safety of the campfire), and who distributes that gold to the community. He rescues the youthful virgin from the predatory reptile. That’s St. George. It’s the oldest story we know of. It’s in the Enuma Elish, the Mesopotamian creation myth, upon which the opening lines of Genesis are historically predicated. Can’t you see the evolutionary relationship?

That’s the archetypal hero. That’s first, a way of behaving; second, a representation of acting; third, a way of organizing society around that action and representation; fourth, a society that then selects, through masculine competition, for the best contender to that representation; fifth, what is selected for by women, who peel off the top of the masculine competition. They outsource the impossible cognitive task of mate selection to the male dominance hierarchy. A hero emerges at the top of the competition. He gets all the girls. Human females are mother nature, the selection apparatus, the choosy maters (that female chimps are not).

The archetypal hero is a super-meme. It has been around so long that we have adapted, biologically, to its existence, just as we have adapted in every way to the three hundred million year old dominance hierarchy, which is more permanent—more real, even from a strictly realist perspective—than such evanescent phenomena as amphibians, reptiles, and mammals: older even [than] trees. The closer you are to the archetypal hero, the more likely you are, at least as a male, to win the dominance hierarchy contest that makes you attractive to women.

If Dawkins was wiser, he would have been Carl Jung. An archetype is the ultimate meme.”

I trust that these are the sorts of claims that Peterson would have made had we moved on from the narrow question of what makes a statement true (or more true than its rivals). And I have no doubt that many of Peterson’s fans will think that the above passage puts his view on firmer footing. I disagree. In fact, I’m pretty sure I disagree with most of what Peterson says here, insofar as I understand it. Has human evolution actually selected for males that closely conform to the heroism of St. George? And is this really the oldest story we know? Aren’t there other stories just as old, reflecting quite different values that might also have adaptive advantages? And in what sense do archetypes even exist? These quibbles aside, isn’t it obvious that most of what we consider ethical—indeed, almost everything we value—now stands outside the logic of evolution?

Overcoming tribalism, xenophobia, honor violence, and other forms of apish barbarity has been unthinkable for hundreds of millennia—that is, until now.

In the year 2017, the question “How should we act in the world?” simply isn’t reducible to Darwinism. In fact, most answers to this question arise in utter defiance of the evolutionary imperatives that produced us. Caring for disabled children would most likely have been maladaptive for our ancestors during any conditions of scarcity—while cannibalism recommended itself from time to time in every corner of the globe. How much inspiration should we draw from the fact that killing and eating children is also an ancient “archetype”? Overcoming tribalism, xenophobia, honor violence, and other forms of apish barbarity has been unthinkable for hundreds of millennia—that is, until now. And our moral progress on these fronts is the basis of our most enlightened answers to Peterson’s question.

We didn’t evolve to do science, or to build institutions that last for generations, but we must do these things to thrive. Thriving requires the survival of the species, of course, but it’s not reducible to that. Getting our genes into the next generation simply isn’t our only (or even our primary) goal—and it surely isn’t the foundation of our ethics. If we were true Darwinians, every man’s deepest desire would be to continually donate sperm to sperm banks so that he could sire thousands of children for whom he’d have no further responsibility. If we really viewed the world from the perspective of our genes, no other answer to the question “How should we act in the world?” would seem more fitting. I’ll let readers judge how closely this maps onto the human minds with which they’re acquainted.

Peterson believes that there is an inverse symmetry to our views on the relationship between facts and values. According to him, I see “ethics as nested inside scientific realism,” whereas he sees “scientific realism as nested inside Darwinian competition” (which he views in ethical terms).  A clearer way of stating this is that he thinks I locate all values within a system of truth claims, whereas he locates all truth claims in a system that selects for a single value: survival. Hence our stalemate.

Peterson’s peculiar form of pragmatism, anchored to the lone value of survival, can’t capture what we mean by “truth” (or even what most pragmatists mean by it).

But I have always said that the scientific worldview presupposes the validity of certain values—logical consistency (up to a point), explanatory elegance, respect for evidence, and so forth. This is why I think Hume’s famous gap between “is” (facts) and “ought” (values) is misleading on the topic of morality. We can easily reverse direction and discover that we won’t get to “is” without first obeying certain “oughts.” For instance, to understand what the cause of an illness is, one ought to pay attention to regularities in the body and in the environment that coincide with it. (Additionally, we now know that one ought to emphasize material causes, rather than sympathetic magic or the evil eye.) Facts and values are connected.

However, the fact that some values lie at the foundation of our scientific worldview does not suggest that all scientific truth claims can be judged on the basis of the single (Darwinian) criterion of whether the claimants survive long enough to breed.  On the contrary, this assertion is quite obviously false (as I believe I demonstrated throughout our podcast). We can easily imagine our species being outcompeted by one that has no understanding whatsoever of the cosmos. Would a lethal swarm of disease-bearing insects possess a worldview superior to our own by virtue of eradicating us? The question answers itself—because no insect could even pose it. Mere survival doesn’t suggest anything about the intellectual or ethical achievement of the survivors.

Some who listened to my conversation with Peterson thought that in objecting to his conception of truth, I was endorsing materialism or denying that the mind could play any role in determining the character of reality. But that isn’t the case. I was merely arguing that Peterson’s peculiar form of pragmatism, anchored to the lone value of survival, can’t capture what we mean by “truth” (or even what most pragmatists mean by it).

I remain open to further exchanges with Peterson. But given the volume of complaints I’ve received about our first podcast, I need to know that my regular listeners really want that.

So I’ve launched a one-question poll on Twitter. If you have an opinion on the topic, please take a moment to answer it:

Should @jordanbpeterson and I do a second podcast in which we attempt to discuss religion, atheism, ethics and other topics?