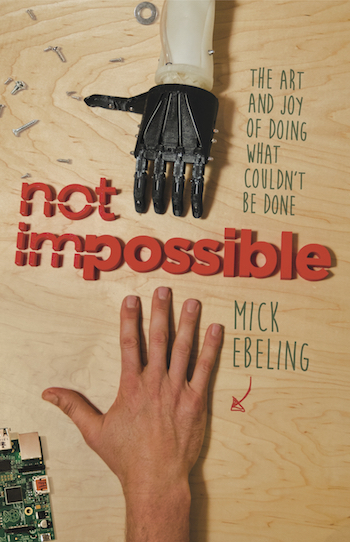 Mick Ebeling is a film/television/commercial producer, philanthropist, technology trailblazer, author, entrepreneur, and public speaker. He was one of Advertising Age’s “Top 50 Most Creative People of 2014” and winner of the 2014 Muhammad Ali Humanitarian of the Year Award. Ebeling is CEO of Not Impossible Labs, an organization that develops creative solutions to real-world problems.

Ebeling’s first book is Not Impossible: The Art and Joy of Doing What Couldn’t Be Done.

Harris: Perhaps you can tell those readers who may be unfamiliar with your work what you are doing and how you came to be doing it.

Ebeling: The concept of Not Impossible began when I met an infamous LA-based graffiti artist named Tempt who was completely paralyzed with ALS. I met him at a time in my life when I felt the need to do something more in this world for others. I ended up taking a meeting with Tempt’s family, and in that meeting they shared with me that they wanted nothing more than to communicate with him again. Being a father and a brother, I connected with their struggle and decided to do everything I could to help. I enthusiastically (and prematurely, mind you) committed to finding them a solution—and thus the path of Not Impossible began.

So, with a motley crew of hackers, a cheap pair of sunglasses, some copper wire, a PS3 camera that we hacked open and mounted on an LED light, and some odds and ends from Home Depot and Radio Shack, we developed a device for him called the EyeWriter. The EyeWriter used ocular recognition technology to help Tempt create art again. We then made both the code and the instructions for building an EyeWriter open source, because we wanted others to have access to this technology, and I didn’t feel that people’s socioeconomic status should govern whether or not they had the ability to communicate with their families. I found myself wanting to continue this mission of helping other people, and Not Impossible has been around ever since, hacking and creating “technology for the sake of humanity.”

Harris: Your willingness to plunge into totally unfamiliar territory is both fascinating and inspiring. Can you tell us more about what it’s been like to do this?

Ebeling: The projects we have completed certainly have been daunting, given my lack of expertise in the areas we were addressing. My background is in production—specifically in animation and design. Being surrounded daily by all these incredible machines that allow artists’ visions to go from their heads to their hands and onto the screen, I felt there had to be some way we could help Tempt create art again and just skip the hands part. The big question was not why but how we would do this. Using every resource I could think of, I brought together a group of great scientific minds to help brainstorm and create the EyeWriter. This group of guys knew how to take apart any device and put it back together in a way I never could.

What I learned from the experience of the EyeWriter is that we humans can mold technology to fulfill our needs. The famous quote “Everything that can be invented has been invented” is so very true. All the EyeWriter’s parts were pre-existing. We “invented” nothing. We merely created a new combination of that technology to fulfill our purpose. The technology is hardly transcendent. It is merely progress. The EyeWriter ended up winning all sorts of accolades, such as inclusion in Time’s Top 50 Inventions, and is now a permanent installation at MOMA in New York. From the incredible (and unplanned) success of that project, I knew that moving forward, there really was no obstacle that could prevent me from using technology to help someone.

Harris: Do you have any general insights or words of caution to share on the basis of this experience?

Ebeling: Two insights that Not Impossible has given me:
1. Technology is not just about the latest and greatest gadget. Science and technology have immense potential to help humanity when approached from the standpoint of making things highly functional and accessible (read: cheap). Through our desire to innovate, technology can become a more durable, more intelligent, and more accessible tool, especially when it is shared freely and without the governing concept of IP and ownership baked into every decision that is made.
2. The philosophy that nothing is impossible isn’t religious dogma. It does not require faith. It is 100% statistical. Every single thing that surrounds us and that is possible today was impossible before it was possible. It is incredibly narcissistic for anyone to think of his or her self as the only person who has finally reached the one single thing that is impossible, the first “impasse” that can never be solved.  It might take a while—weeks, days, years—but it is inevitable that eventually ____?____ will be possible. I find that enormously motivating and comforting at the same time.