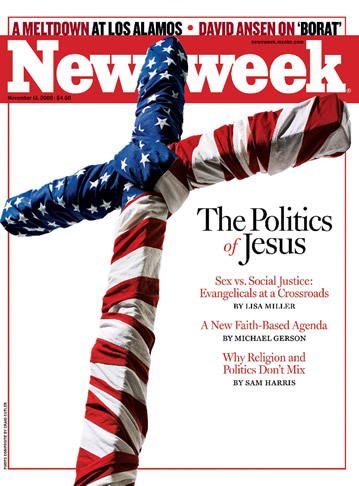 Faith and doubt inform two important pieces in the Special Report. One, by former Bush speechwriter and adviser Michael Gerson, lays out a new, broader vision for conservative Christians. To offer a radically different view, we invited Sam Harris, an atheist who is the author of “Letter to a Christian Nation” and “The End of Faith,” to offer his perspective on mixing politics and religion…

Despite a full century of scientific insights attesting to the antiquity of life and the greater antiquity of the Earth, more than half the American population believes that the entire cosmos was created 6,000 years ago. This is, incidentally, about a thousand years after the Sumerians invented glue. Those with the power to elect presidents and congressmen—and many who themselves get elected—believe that dinosaurs lived two by two upon Noah’s Ark, that light from distant galaxies was created en route to the Earth and that the first members of our species were fashioned out of dirt and divine breath, in a garden with a talking snake, by the hand of an invisible God.

This is embarrassing. But add to this comedy of false certainties the fact that 44 percent of Americans are confident that Jesus will return to Earth sometime in the next 50 years, and you will glimpse the terrible liability of this sort of thinking. Given the most common interpretation of Biblical prophecy, it is not an exaggeration to say that nearly half the American population is eagerly anticipating the end of the world. It should be clear that this faith-based nihilism provides its adherents with absolutely no incentive to build a sustainable civilization—economically, environmentally or geopolitically. Some of these people are lunatics, of course, but they are not the lunatic fringe. We are talking about the explicit views of Christian ministers who have congregations numbering in the tens of thousands. These are some of the most influential, politically connected and well-funded people in our society.

It is, of course, taboo to criticize a person’s religious beliefs. The problem, however, is that much of what people believe in the name of religion is intrinsically divisive, unreasonable and incompatible with genuine morality. One of the worst things about religion is that it tends to separate questions of right and wrong from the living reality of human and animal suffering. Consequently, religious people will devote immense energy to so-called moral problems—such as gay marriage—where no real suffering is at issue, and they will happily contribute to the surplus of human misery if it serves their religious beliefs.

A case in point: embryonic-stem-cell research is one of the most promising developments in the last century of medicine. It could offer therapeutic breakthroughs for every human ailment (for the simple reason that stem cells can become any tissue in the human body), including diabetes, Parkinson’s disease, severe burns, etc. In July, President George W. Bush used his first veto to deny federal funding to this research. He did this on the basis of his religious faith. Like millions of other Americans, President Bush believes that “human life starts at the moment of conception.” Specifically, he believes that there is a soul in every 3-day-old human embryo, and the interests of one soul—the soul of a little girl with burns over 75 percent of her body, for instance—cannot trump the interests of another soul, even if that soul happens to live inside a petri dish. Here, as ever, religious dogmatism impedes genuine wisdom and compassion.

A 3-day-old human embryo is a collection of 150 cells called a blastocyst. There are, for the sake of comparison, more than 100,000 cells in the brain of a fly. The embryos that are destroyed in stem-cell research do not have brains, or even neurons. Consequently, there is no reason to believe they can suffer their destruction in any way at all. The truth is that President Bush’s unjustified religious beliefs about the human soul are, at this very moment, prolonging the scarcely endurable misery of tens of millions of human beings.

Given our status as a superpower, our material wealth and the continuous advancements in our technology, it seems safe to say that the president of the United States has more power and responsibility than any person in history. It is worth noting, therefore, that we have elected a president who seems to imagine that whenever he closes his eyes in the Oval Office—wondering whether to go to war or not to go to war, for instance—his intuitions have been vetted by the Creator of the universe. Speaking to a small group of supporters in 1999, Bush reportedly said, “I believe God wants me to be president.” Believing that God has delivered you unto the presidency really seems to entail the belief that you cannot make any catastrophic mistakes while in office. One question we might want to collectively ponder in the future: do we really want to hand the tiller of civilization to a person who thinks this way?