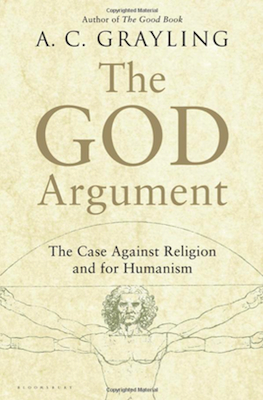 A.C. Grayling is Master of the New College of the Humanities (London). He is the author of the acclaimed Among the Dead Cities: The History and Moral Legacy of the WWII Bombing of Civilians in Germany and Japan, Descartes: The Life and Times of a Genius, Toward the Light of Liberty: The Struggles for Freedom and Rights That Made the Modern Western World, and, most recently, The Good Book: A Humanist Bible. A former fellow of the World Economic Forum at Davos and past chairman of the human rights organization June Fourth, he contributes frequently to the Times, Financial Times, Economist, New Statesman, and Prospect. Grayling’s play “Grace,” co-written with Mick Gordon, was acclaimed in London and New York. He is also an advisor to my nonprofit foundation, Project Reason.

Anthony’s new book is The God Argument: The Case against Religion and for Humanism.

What is your religious background?

I was brought up in a non-religious household and was first presented with religious ideas in school; they did not persuade me but on the contrary seemed non-rational and misleading. In the study of history I became aware of the effects of religious divisions and sectarianism on individuals and societies, and came to think that freedom from religious influence is a human rights issue. I am an atheist, a secularist and a humanist.

Perhaps you should clarify the differences between atheism, secularism, and humanism.

The first is a metaphysical view about what the universe contains (about what exists), the second is a commitment to separation of religious organizations from state organizations, and the third is the ethical outlook of any reflective person who does not have any religious beliefs or commitments.

What are the roots of humanism, in your view?

The tradition of ethical thought stemming from classical antiquity is the foundation of humanism (and is a thousand years older than Christianity)—the study of these ideas suggests their living applicability to life, and I have been keen to alert people to this fact. Often people ask “what is the alternative to religion as a philosophy of life,” and the emphatic answer is: humanism.

Humanism is a philosophical starting point for reflection on how one should live, according to one’s own talents and interests and under the government of respecting others and not doing them harm, allowing them their own quest for an individual good life.

Do you think a person can be both a humanist and a person of faith?

No, religion and humanism are not consistent—unless you mean ‘humanism’ in the Renaissance sense, where it denoted the study of classical literature. But this study soon showed people that the ideas and outlook of classical thought is at odds with religion, which is why humanism is now a secular philosophy.

Do you have any advice on how to raise children as humanists in a world where most people are religious?

Easy—make children conscious of their responsibilities to others, help them to be clear-eyed and to think, question, always ask for the evidence and arguments in support of any proposition—and explain how the legacy of mankind’s ignorant past survives in religious beliefs and practices, and what role these have in social life as a result of their historical embedding.

What would you say to someone who argues that we need religion, whether or not any religious doctrine is true, because religion gives us spirituality, rituals, etc.?

I say that such pleasures and relaxations as a country walk, dinner with friends, an afternoon in an art gallery, attending a concert or the theatre, intimacy with a loved one, lying on a beach in the sun, reading and learning, making things, are all “spiritual exercises” in their refreshment, strengthening and promotion of connections with others and the world—these are the only “rituals” and observances required for an intelligent appreciation of what is good and possible in human life.

There’s one meme I find especially galling these days—it’s the claim that atheists (or the “new atheists”) are just as dogmatic as religious fundamentalists are. This is one of those zombie ideas that, no matter how many times you kill it, it comes shambling back at you. I’m wondering what your response to it is.

There are two components to the answer: One needs to explain what “dogma” means, viz. a teaching to be accepted on authority not enquiry, and one needs to explain that robust opposition to religion in its too-common forms of bigotry, anti-science, anti-LGBT, anti-women, to say nothing of terrorism (and to ‘moderate’ religion as the burka for all this, as you point out), is justified, and cannot be effected by compromise and soft-speaking. Slavery would never have been abolished by such means.