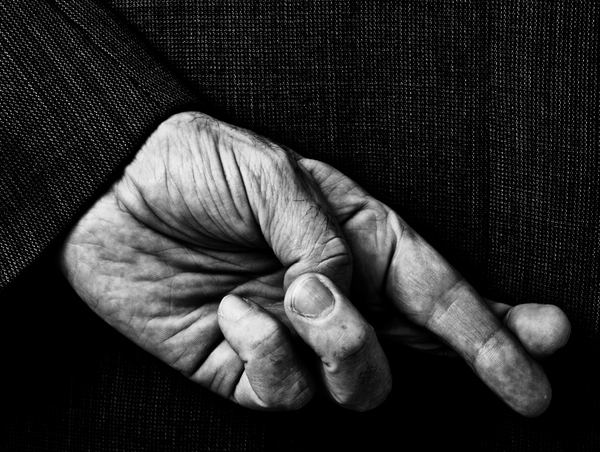 Last Christmas, my friends Mark and Jessica spent the morning opening presents with their daughter, Rachel, who had just turned four. After a few hours of excitement, feelings of holiday lethargy and boredom descended on the family—until Mark suddenly had a brilliant idea for how they could have a lot more fun.

Jessica was reading on the couch while Rachel played with her new dolls on the living room carpet.

“Rachel,” Mark said, “I need to tell you something very important… You can’t keep any of these toys. Mommy and I have decided to give them away to the other kids at your school.”

A look of confusion came over his daughter’s face. Mark caught Jessica’s eye. She recognized his intentions at once and was now struggling to contain her glee. She reached for their new video camera.

“You’ve had these toys long enough, don’t you think, Sweetie?”

“No, Daddy! These are my Christmas presents.”

Mark began gathering her new toys and putting them in a trash bag.

“They’re only toys, Rachel. Time to grow up!”

The look of terror on his daughter’s face was too funny for words. Mark could barely speak. He heard Jessica struggling to stifle a laugh as she stepped around the couch with the camera so that she could capture all the action from the front. Mark knew that if he made eye contact with his wife, he would be lost.

“These Polly Pockets belong to another little girl now… She’s going to love them!”

That did the trick. His daughter couldn’t have produced a louder howl of pain had he hit her with a hammer. Luckily, Jessica caught the moment close-up—her daughter’s hot tears of rage and panic nearly wet the lens.

Mark and Jessica immediately posted the footage of Rachel’s agony to YouTube, where 24 million people have now seen it. This has won them some small measure of fame, which makes them very happy.

No doubt, you will be relieved to learn that Mark, Jessica, and Rachel do not exist. In fact, I am confident that no one I know would treat their child this way. But this leaves me at a loss to explain the popularity of a morally identical stunt engineered for three years running by Jimmy Kimmel:

As you watch the above video and listen to the laughter of Kimmel’s studio audience, do your best to see the world from the perspective of these unhappy children. Admittedly, this can be difficult. Despite my feelings of horror over the whole project, a few of these kids made me laugh as well—some of them are just so adorably resilient in the face of parental injustice.  However, I am convinced that anyone who takes pleasure in all this exploited cuteness is morally confused. Yes, we know that these kids will get their candy back in the end. But the kids themselves don’t know it, and the betrayal they feel is heartbreakingly genuine. This is no way to treat children.

It is true that the tears of a child must often be taken less seriously than those of an adult—because they come so freely. To judge from my daughter’s reaction in the moment, getting vaccinated against tetanus is every bit as bad as getting the disease. All parents correct for this distortion of reality—and should—so that they can raise their kids without worrying at every turn that they are heaping further torments upon the damned.  Nevertheless, I am astonished at the percentage of people who find the Kimmel videos morally unproblematic. When I expressed my concern on Twitter, I received the following defenses of Kimmel and these misguided parents:

These responses are callous and crazy. A four-year-old cannot possibly learn that candy “doesn’t matter”—in fact, many adults can’t seem to learn this. But he can learn that his parents will lie to him for the purpose of making him miserable. He can also learn that they will find his suffering hilarious and that, at any moment, he might be shamed by those closest to him. True, he may not remember learning these lessons explicitly—unless he happens to watch the footage on YouTube as it surpasses a billion views—but he will, nevertheless, be a person who was raised by parents who played recklessly with his trust. It amazes me that people think the stakes in these videos are low.

My daughter is nearly five, and I can recall lying to her only once. We were looking for nursery rhymes on the Internet and landed on a page that showed a 16th-century woodcut of a person being decapitated. As I was hurriedly scrolling elsewhere, she demanded to know what we had just seen. I said something silly like “That was an old and very impractical form of surgery.” This left her suitably perplexed, and she remains unaware of man’s inhumanity to man to this day. However, I doubt that even this lie was necessary. I just wasn’t thinking very fast on my feet.

As parents, we must maintain our children’s trust—and the easiest way to lose it is by lying to them. Of course, we should communicate the truth in ways they can handle—and this often demands that we suppress details that would be confusing or needlessly disturbing. An important difference between children and (normal) adults is that children are not fully capable of conceiving of (much less looking out for) their real interests. Consequently, it might be necessary in some situations to pacify or motivate them with a lie. In my experience, however, such circumstances almost never arise.

Many people imagine that it is necessary to lie to children to make them feel good about themselves. But this makes little moral or intellectual sense. Especially with young children, the purpose of praise is to encourage them to try new things and enjoy themselves in the process. It isn’t a matter of evaluating their performance by reference to some external standard. The truth communicated by saying “That’s amazing” or “I love it” in response to a child’s drawing is never difficult to find or feel. Of course, things change when one is talking to an adult who wants to know how his work compares with the work of others. Here, we do our friends no favors by lying to them.

Strangely, the most common question I’ve received from readers on the topic of deception has been some version of the following:

What should we tell our children about Santa? My daughter asked if Santa was real the other day, and I couldn’t bear to disappoint her.

In fact, I’ve heard from several readers who seemed to anticipate this question, and who wrote to tell me how disturbed they had been when they learned that their parents had lied to them every Christmas. I’ve also heard from readers whose parents told the truth about Santa simply because they didn’t want the inevitable unraveling of the Christmas myth to cast any doubt on the divinity of Jesus Christ. I suppose some ironies are harder to detect than others.

I don’t remember whether I ever believed in Santa, but I was never tempted to tell my daughter that he was real. Christmas must be marginally more exciting for children who are duped about Santa—but something similar could be said of many phenomena about which no one is tempted to lie. Why not insist that dragons, mermaids, fairies, and Superman actually exist? Why not present the work of Tolkien and Rowling as history?

The real truth—which everyone knows 364 days of the year—is that fiction can be both meaningful and fun. Children have fantasy lives so rich and combustible that rigging them with lies is like putting a propeller on a rocket. And is the last child in class who still believes in Santa really grateful to have his first lesson in epistemology meted out by his fellow six-year-olds? If you deceive your children about Santa, you may give them a more thrilling experience of Christmas. What you probably won’t give them, however, is the sense that you would not and could not lie to them about anything else.

We live in a culture where the corrosive effect of lying is generally overlooked, and where people remain confused about the difference between truly harmless deceptions—such as the poetic license I took at the beginning of this article—and seemingly tiny lies that damage trust. I’ve written a short book about this. Its purpose is to convey, in less than an hour, one of the most significant ethical lessons I’ve ever learned: If you want to improve yourself and the people around you, you need only stop lying.