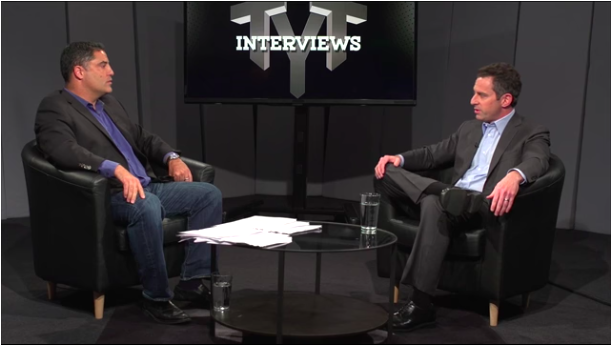 I recently sat down with Cenk Uygur of The Young Turks to discuss my most controversial views about Islam, the war on terror, and related topics. It was, of necessity, a defensive performance on my part—more like a deposition than an ordinary conversation. Although it was a friendly exchange, there were times when Cenk appeared to be trying very hard to miss my point. Rather than rebut my actual views (or accept them), he often focused on how a misunderstanding of what I was saying could lead to bad outcomes—as though this were an argument against my views themselves. However, he did provide a forum in which we could have an unusually full discussion about difficult issues. I hope viewers find it useful.

Having now watched the full exchange, I feel the need to expand on a couple of points:

Journalistic Ethics
The passage of journalism into its digital future is proving more than a little perilous. We seem to be circling a vortex, at the bottom of which lies the perennial problem of money: How can writers, editors, and publishers get paid for their work? I can’t help but feel that a reliance on advertising is encouraging the worst instincts in everyone involved. There is comedy to be found here, of course. I recently came across an article accusing me of “sexism” that was paid for by ads promising access to “Sexy Asian Brides.” However, the results of any system of bad incentives are rarely amusing. We must find some way to correct course.

I began my conversation with Cenk by complaining about how he had treated me on his show in the previous weeks. I think his unwillingness to acknowledge the difference between valid criticism and misrepresentation was a missed opportunity (for him). He seems to believe that allowing a target of defamation to give his or her side of the story provides the necessary balance. He also detects an ethical symmetry where none exists: If writer X has been spreading malicious lies about writer Y, and Y accurately describes X as “a liar,” that does not give each party an equivalent grievance against the other. Cenk seems to view most claims of misrepresentation as a he-said-she-said stalemate that is, in principle, impossible to resolve.

This is a growing problem in journalism. In my conversation with Cenk, I briefly discussed Salon’s unethical treatment of me, but I’ve had many other encounters with journalists and editors that should trouble readers.

For instance, I recently discussed an incident in which Glenn Greenwald forwarded a tweet describing me as “genocidal fascist maniac” (Reza Aslan did the same). Feeling that these attacks had gone on long enough, I decided to call John Cook, the editor in chief at the Intercept.

Here is a snippet of our conversation:

Me: My criticism of Islam is not racist.

Cook: It is racist.

Me: John, Islam is not a race. You can’t convert to a race. And my criticism of Islam applies to white converts just as much as it does to Arabs or anyone else born in a Muslim country. In fact, it applies to converts more because they weren’t brainwashed into the faith from birth.

Cook: So all Arabs are brainwashed?

Me: I was just making a point about the difference between having an ideology drummed into you from birth and converting to it as an adult who may have had the benefit of an Oxford education! These are different cases. And I am less judgmental of the former.

The conversation continued like this for 40 minutes. I felt like I was talking to a robot programmed to run a reason-destroying, political-correctness routine until the end of the world. It was, in fact, the most maddening encounter I’ve had with another human being in decades. I actually hung up on the man. (I haven’t done that since high school.)

I have no idea what Cook’s background is, but this is not a person who should be guiding journalism into its digital future. The only ethical defense he could give me for Greenwald’s retweeting defamatory nonsense about me (again, calling me a “genocidal fascist maniac”) was that “everyone knows that retweets don’t equal endorsements”—as if this were some high principle of journalistic ethics. Of course, in this case it was an endorsement. Greenwald has repeatedly described me as a dangerous bigot in print and on social media—and reaffirming this negative impression of me was the whole point of his passing this tweet along to his 420,000 followers.

What makes Cook’s precarious hold on journalistic integrity so ominous is that he, Greenwald, and colleagues have been given $250 million in funding from Pierre Omidyar. This is a fantastic sum of money—indeed, it is the same amount that Jeff Bezos recently paid for the Washington Post. It is difficult to see how this bodes well for the future of journalism.

It is also important to observe how social media is facilitating this race to the bottom. For instance, one of my critics on Twitter recently misrepresented my views about the distinction between what is “natural” and what is “good.” When discussing this difference, I often say things like “There is nothing more natural than rape: orangutans do it; dolphins do it; and people do it.” But the next words out of my mouth are always something like, “But no one would argue that rape is good, or compatible with a civil society, because it may have had evolutionary advantages for certain species. Rape is one of the most immoral behaviors there is.” Perhaps you can guess how this person summarized my views about rape for his 10,000 followers: In a series of tweets he represented me as someone who sees no moral problem with rape at all, because it is a perfectly “natural,” biological imperative.

When I complained about this on Twitter, here is what Murtaza Hussain, Greenwald’s colleague at the Intercept, tweeted: “You’re going to have to come to grips w/ the fact that no ones misinterpreting you—you just have monstrous views.” Needless to say, Hussain has written multiple articles attacking me as a racist, warmonger, and “Islamophobe.”

Here is the most charitable interpretation I can make of this behavior: People like Greenwald and Hussain are so sure that they are on the right side of important issues that, when they see someone whom they imagine to be on the wrong side, they feel justified in distorting his views in an effort to destroy his credibility. This is an all-too-human impulse, of course, but it is extraordinarily destructive behavior in “journalists.”

Correcting an Error of My Own
Given how maliciously he has misrepresented me (and how much I have complained about it), it is very unfortunate that I seem to have spoken misleadingly about Greenwald’s attitude toward collateral damage at the end of my conversation with Cenk.

I did not mean to suggest that Greenwald is insensitive to the reality of collateral damage. I meant to say that in his vilification of me for my discussion of torture, he has ignored that my argument is based on my own concern for collateral damage. Given his penchant for defamation and his disinclination to follow careful arguments, he has helped make it nearly impossible to discuss these issues in a public forum. But my point did not come across at all well, and I seemed to suggest either that Greenwald is, like many people, unaware of how horrible collateral damage is or that he does not care about it. Anyone familiar with Greenwald’s work will know that either charge is ludicrous. (If anything, he is too sensitive to collateral damage, and this clouds his thinking about U.S. foreign policy, jihadism, and related matters.)